«Germana Marucelli is not only a fashionable dressmaker that many
call the Italian Christian Dior. She is, first and foremost, an artist –
an artist who loves artists and surrounds herself with painters
and intellectuals. She designs dresses because they enable her create
shapes representative of patent, living beauty. Now she has opened
the doors to her home in Via Cerva 38-2, creating Milan’s first artistic
and literary salon… Furthermore, she has established… a poetry
prize known as the San Babila Prize».
Barbara Rei

Often defined the intellectual dressmaker, Germana Marucelli always maintained close connections with the contemporary world of art and culture. She was aware of the dressmaker’s great social responsibility, calling the job a sacred job. In 1947, she established the San Babila Prize for Poetry. It was a project she firmly believed in and fostered for all its duration.
The San Babila Prize was awarded every two years, the recognition going to both the best Published and Unpublished works.

At the second edition, the first prize for the Published category went to Salvatore Quasimodo (poet and 1959 Literature Nobel Prize laureate) for his book of poems La vita non è un sogno, awarded on 12 June 1950. The winner of the Unpublished category was announced on 22 December 1950, when Andrea Zanzotto (an important Italian late XXth century poet) took first place with Dietro il paesaggio, later published by Mondadori in the anthology “Specchio”.

The awards of the third and final edition, dedicated to poetry and prose, were assigned on 19 June 1952 during a Thursday Rendez-Vouz at Germana Marucelli’s atelier. First prize went to Mario Soldati (writer and film director) for A cena col commendatore. No final winner was chosen for the Unpublished category, for which two works had been nominated: poet Paolo Bernobini’s Canzoniere perduto and storyteller Goffredo Parise’s Il ragazzo morto e le comete.

In those years, Germana Marucelli organised a series of Thursday Rendez-Vous cultural events at her Milan workshop, first in Via Cerva 38/2 [now Via Borgogna 8] and then, beginning in 1950, in Corso Venezia 18. 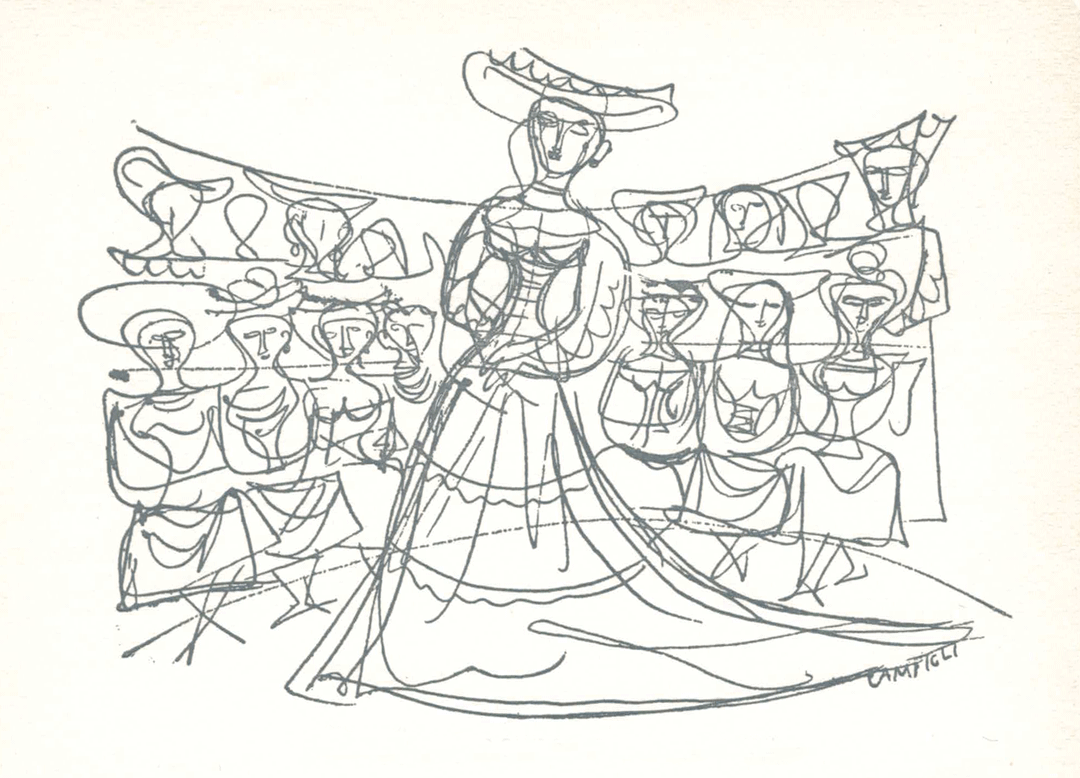 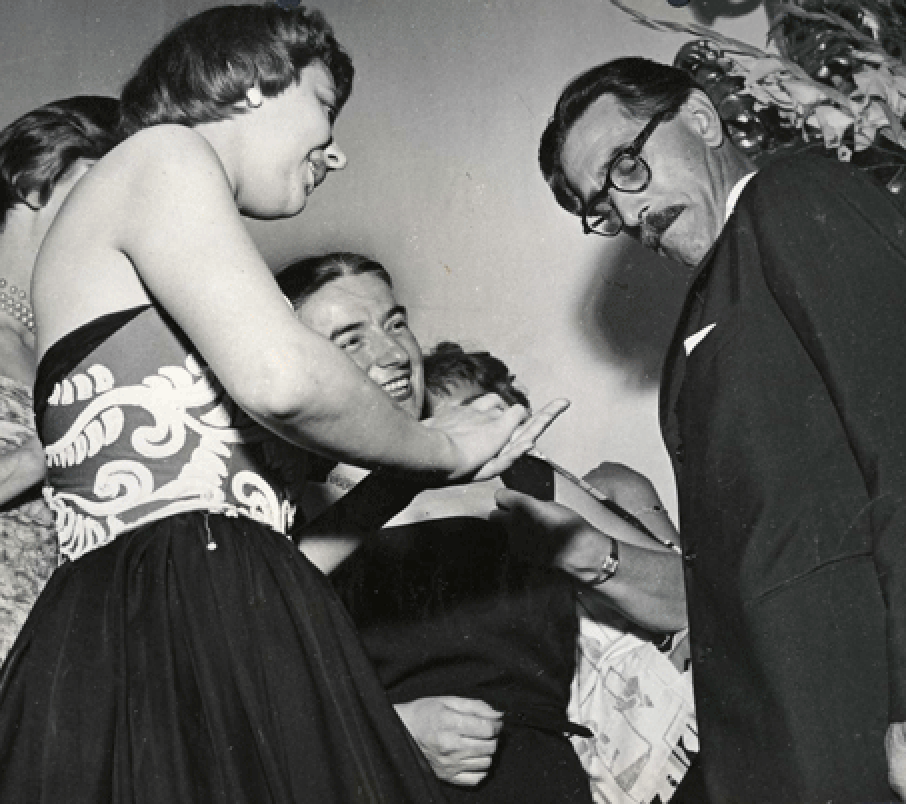 Germana Marucelli used to arrange “small fashion shows” for her poet and artist friends to encourage constructive debate. The invitation card to the fashion shows was designed by her painter friend Massimo Campigli, himself an aficionado of the “Germana Marucelli’s Thursdays”. Her cultural salon became a sort of “shared world”, a venue for people to interact, thus responding to her specific existential need for “being in the world”. The press always followed her fashion shows-events with great interest:

«…That evening, the enormous well-lit rooms in Via Cerva were crowded with very famous figures: the best names in poetry, art, literature… Each one contemplated – all absorbed in and I would even say captivated by – the slow back and forth of models, their thoroughbred gait amidst the typical rustling of fabric… One could just as readily grasp that each person was left to develop a personal thought that took them far away, in a rapid game of associations… And I felt I had finally understood the reality of a relationship that is widely discussed today, a relationship of art-fashion, literature-fashion, that is uniquely modern».
Vittorio Bonicelli, in Tempo, 1949 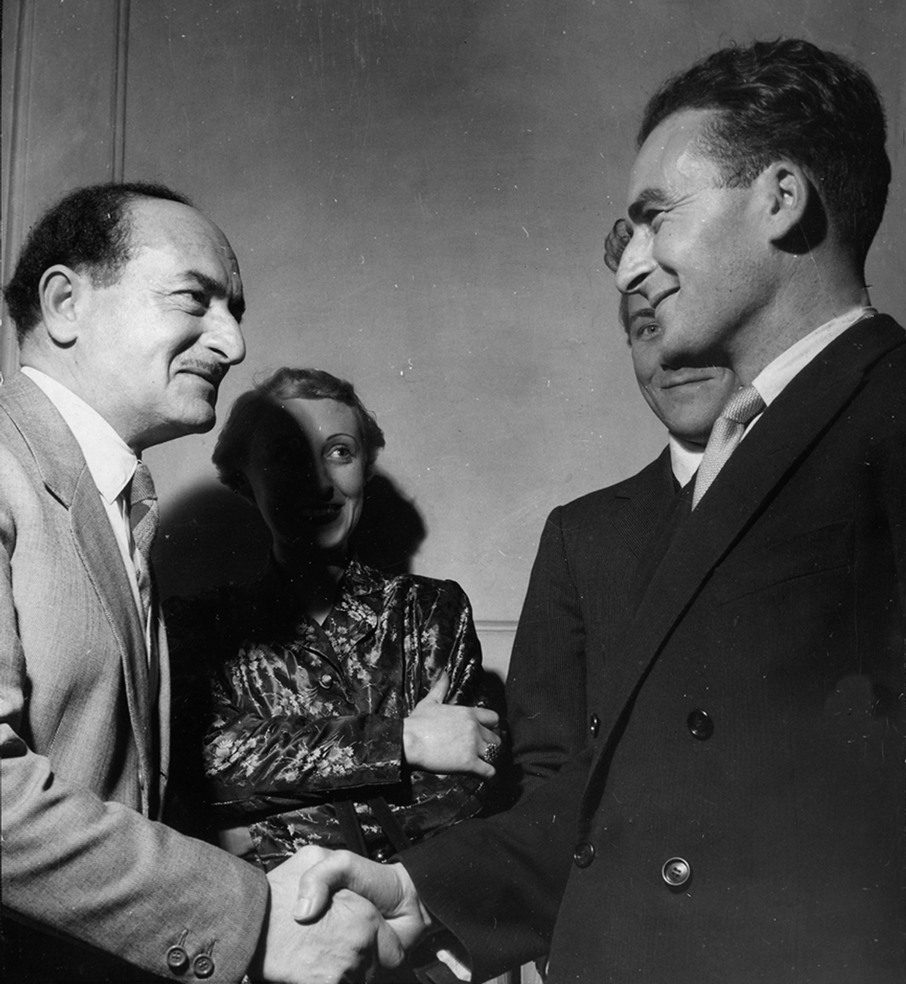 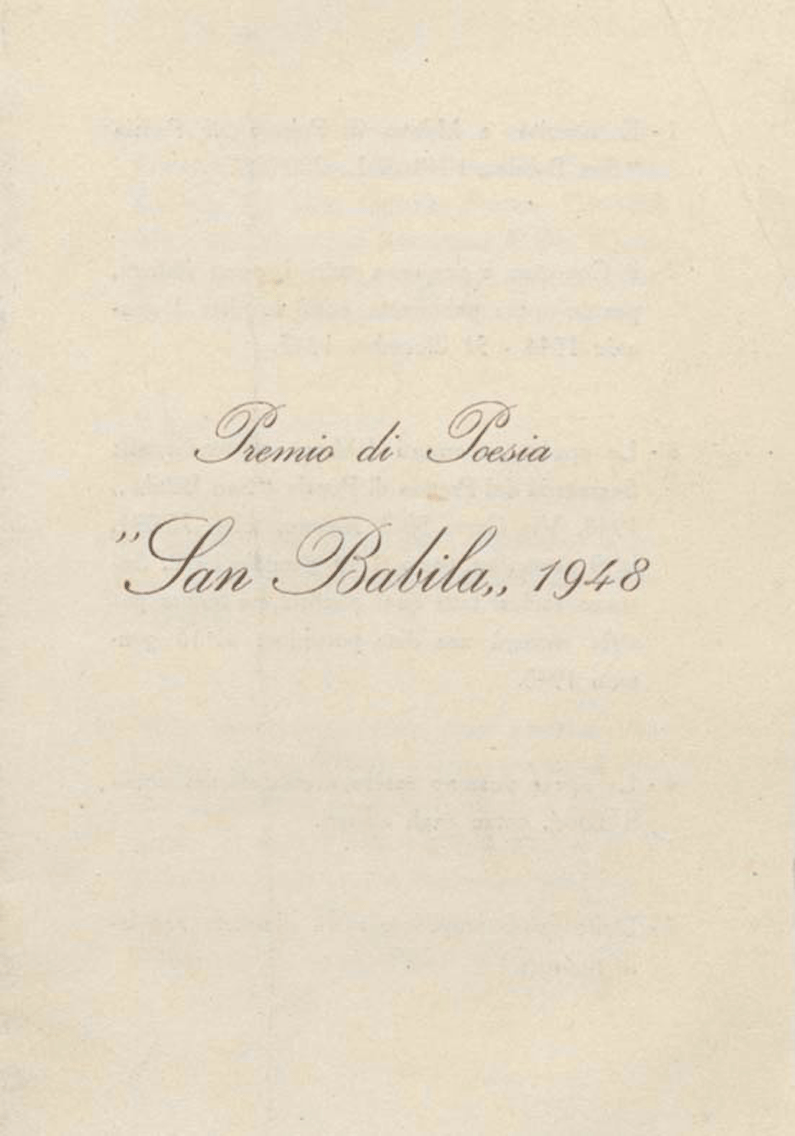 «Every week, someone would come and briefly lecture on their work of art experiences. Germana’s intuition in creating lines and models several years before international fashion was also at work when she chose her lecturers: her lists were a who’s who of figures that would later become touchstones of our contemporary culture but at the time were unknown and often opposed by the critical establishment».
Fernanda Pivano 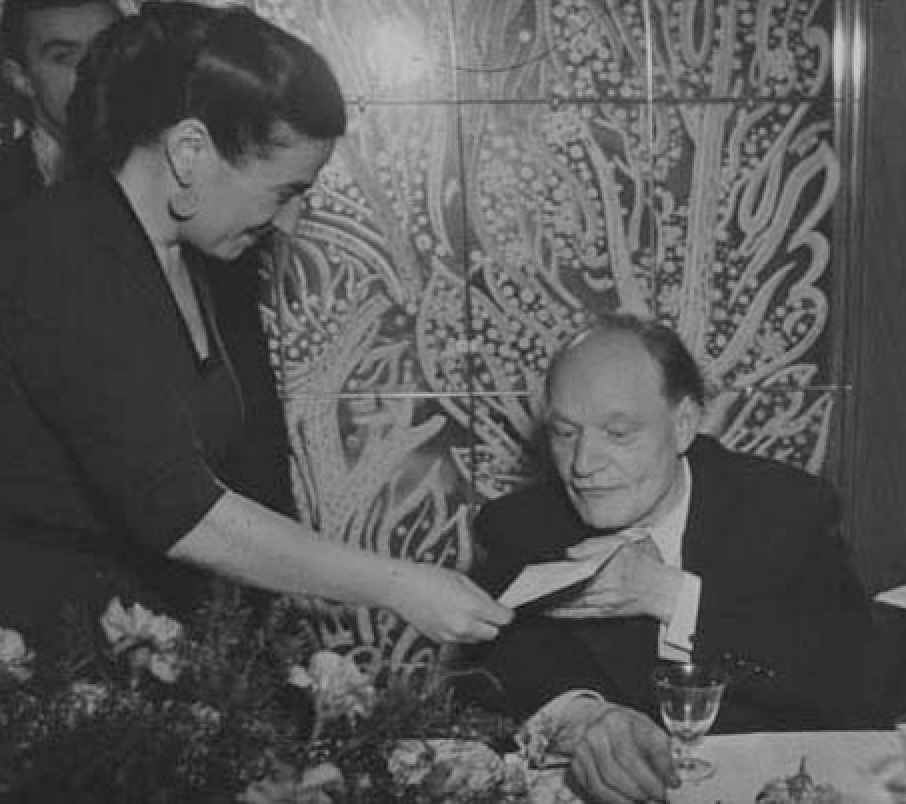 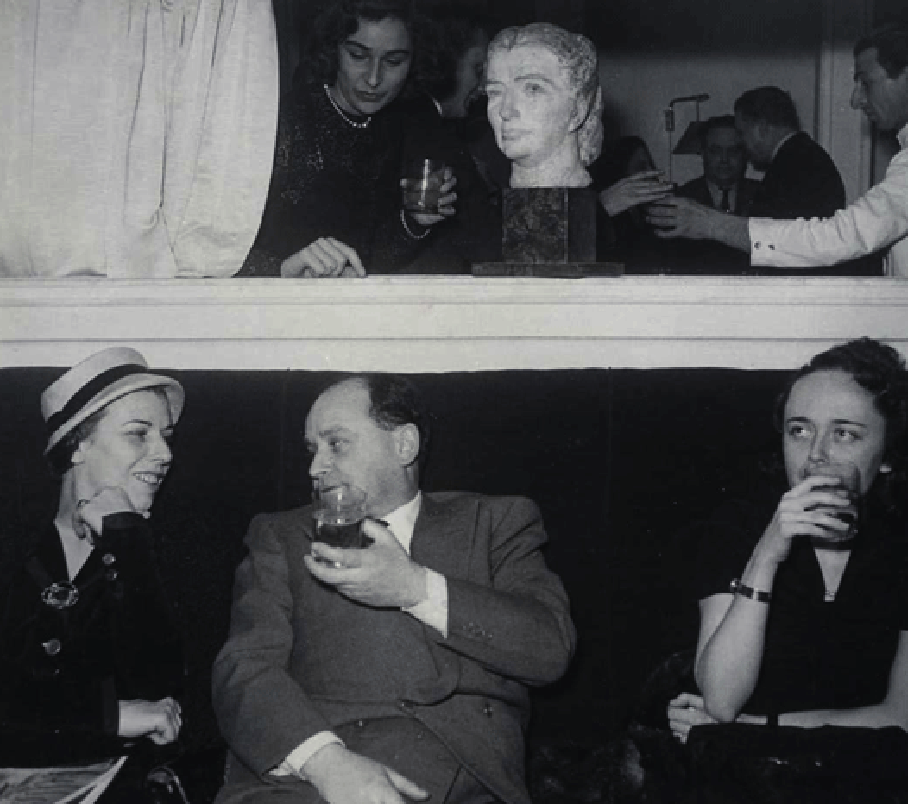 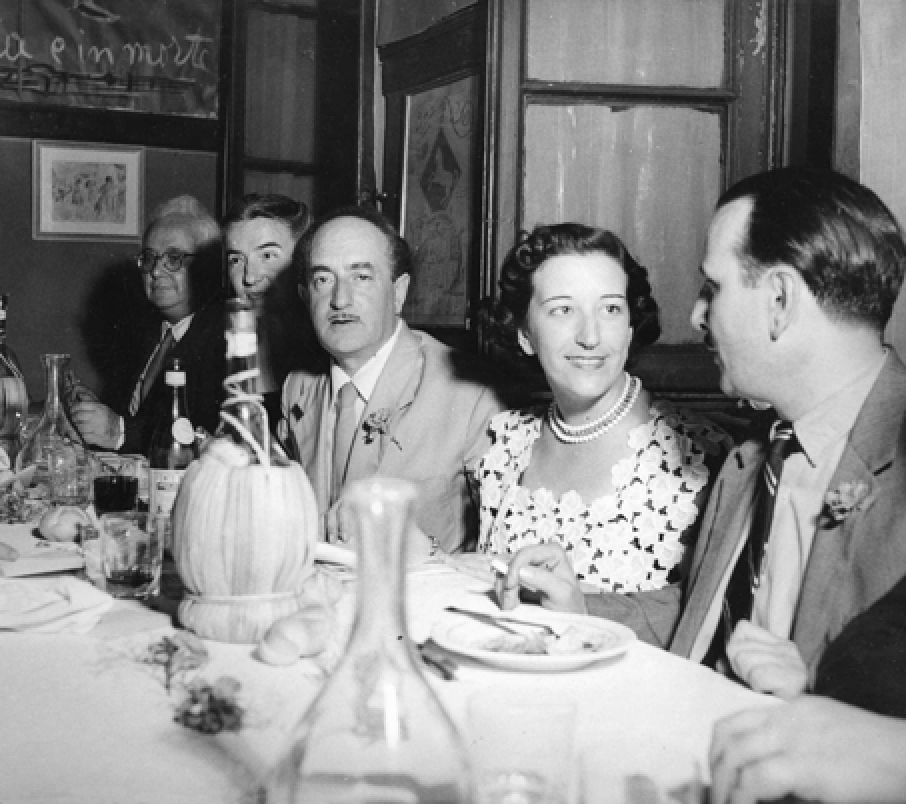 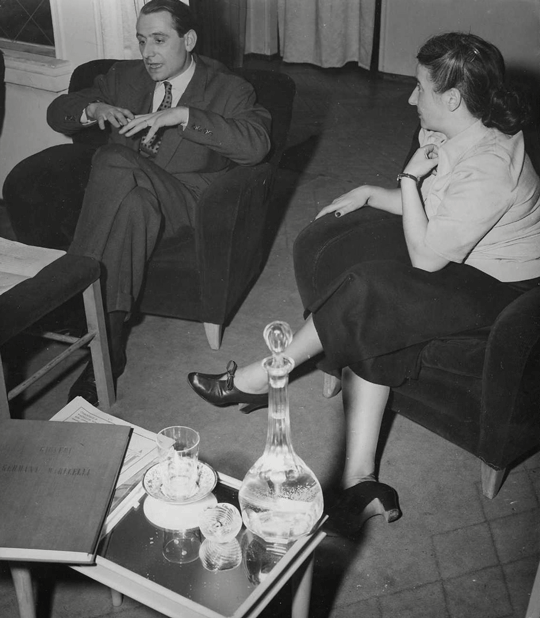 Consorting with her intellectual and artist friends remains a consistant characteristic of her personal as well as creative development. The world of culture continues to participate in her “events-shows” with great interest and active participation even after the “closing” in 1952 of her cultural salon and of the last edition of the San Babila Prize.
San Babila Prize winner and long-time friend Giuseppe Ungaretti left us an unaffected description of the “intellectual dressmaker” that reveals the deeper meaning of her “poetical thought”, so that it may live on:

«…Dear Germana, it is not hard to understand why you love the poetry of words so much. The style of the clothes you invent would not be so light, so ethereal, and yet moved by resolute gravitas in order to hold even for just a moment the fleetingness of grace, if at the same time the poetry of words did not appear to you, in a flash, to show you the fugitive infinity of poetry, guessing its secret. Thank you, Germana, rare interpreter of poetry».
Giuseppe Ungaretti, Naviglioincontri 1969, 1969